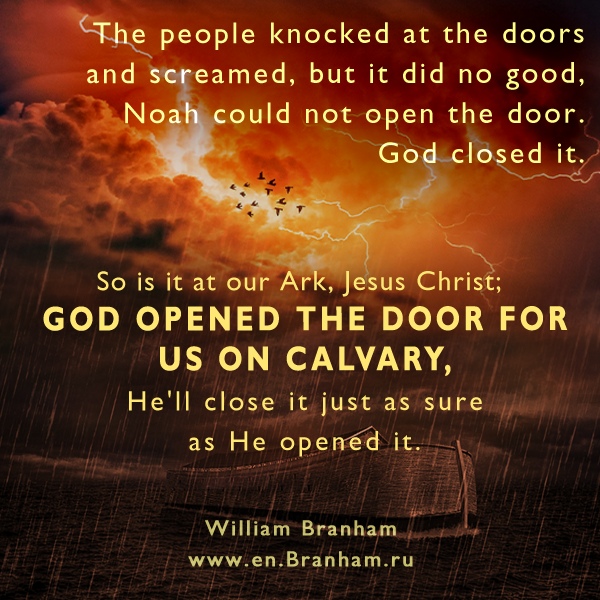 Noah had found grace with God and had built an ark according to the constructions--the instructions, rather, that He had given him. And he had been floated up.
I can imagine his--what happened in them days when they said, "This old man up on the hill, an old fanatic, building an ark, saying it's going to rain, it never has rained." But it...
Noah said, "It's going to rain anyhow."
And then I know the day that he went in, I think what... can't think of what day it was, I believe the seventeenth day of May. Noah entered into the ark, and God shut the door.
And the clouds begin to come; the rains begin to fall; the sewers begin to fill up; the fountains of the deep broke up; the springs all belched up their water. Finally people got into the houses, climbed up. The old ark set right there just the same.
After while when enough begin to get around her, she begin to rise up higher and higher. The people knocked at the doors and screamed, but it did no--no good, Noah could not open the door. God closed it; God's the only One can open it.
So is it at our Ark, Jesus Christ; God opened the door for us on Calvary, He'll close it just as sure as He opened it.

And it floated, and on and on, maybe a mile's deep over the top of the earth when this earth was tumbling out from the way from the--the--its regular orbit. And around and around it went, and chunks, and trees, and above the mountains and so forth, pitching for forty days and nights... And when the winds begin to cease...
God's wrath is horrible. His love is pure and Divine; and His wrath is just as Divine--it's as Divine as His love is, because He must pass judgment because He is a Judge. He's a Law-giver, and law without penalty is not law. So there must be a penalty to law. And you transgress God's laws, that's when you pay the penalty.

William Branham,, Sermon "On The Wings Of A Snow-White Dove"
http://www.en.branham.ru/sermons/65-1128E‌‌‌‌‌‌‌‌‌‌‌‌‌‌‌‌‌‌‌