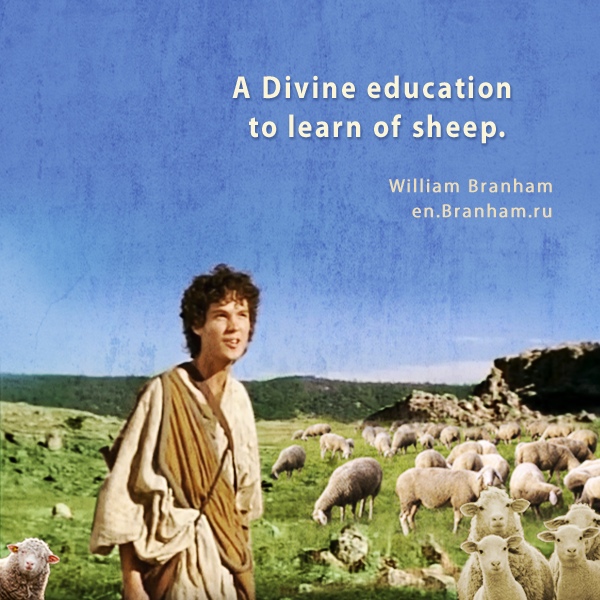 David had been a little shepherd; He said, "I took you from the sheepcote out yonder. Who was you, David? I took you from the sheepcote, from following your father's sheep, and made you a great name," like man of great of the earth.
And I thought of that, about sheep and shepherd. Why did He choose David? David was always talking about still waters and green pastures. He was the psalmist that wrote songs and played on his harp to the glory of God. And he must have been something about David tending sheep; he must have been a real sheepherder. Did you notice one time there was a bear run in and got one of his sheep, and he killed that bear. And a lion run in and got one and he caught that beard--lion by the beard and took a knife and killed that lion. See, it was sacrificing for his sheep. And if he was willing to lay down his life for the sheep, he was a type of the good Shepherd. He was the Son of David, you know, the real Shepherd, the King Shepherd over all.
Did you ever notice in the Bible, just thinking the other day, when a prophet speaks, he says, "THUS SAITH THE LORD." But when Jesus spoke He never said that. He said, "But I say unto you." Then call Him a prophet. He was Emmanuel. Never said, "THUS SAITH THE LORD," He was the Lord. "I say unto you."

Now, there's something that God always likened people unto sheep, did you ever notice? "You're the sheep of the pasture, the sheep of one fold. Other sheep have I," and so forth, likening people unto sheep. You know why He likened us to sheep? Did you ever--did you ever fool with sheep any? They're certainly educational, and a Divine education to--to learn of sheep. I've raised them and shepherded them around, and the little fellows.
But when a sheep is lost, he's absolutely helpless. I picked up sheep, not standing maybe three hundred yards from the sheepfold, and--where all the other sheep was. And that sheep when he's lost he can't help himself; he just stands there and bleats and bleats until the wolf gets him or something takes place. He--he just can't find his way back. He's totally helpless without a shepherd.

And that's the way the human race is, we are absolutely, totally, helpless without the Shepherd of the fold. We can't find our way back. We tried to educate our way back; we've tried to reform our way back; but we'll never be able. Education will never do it. Reformation will never do it. We're not reformers. The police out here are reformers. We're preachers of the Gospel, not to try to put people on penalty and crawl on your knees and so forth, but to preach the Gospel of Jesus Christ: deliverance to the people. That's what the shepherds are supposed to do, to feed the sheep.