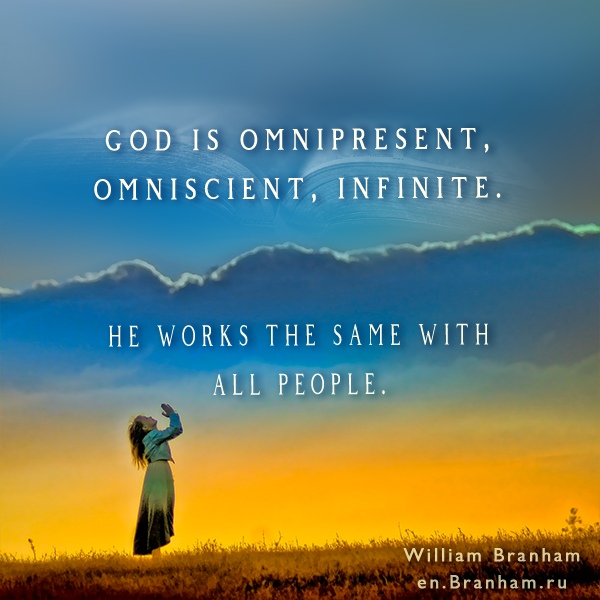 We only know life, as we know it, as a human, because that we've never been nothing but human. But when we're borned again, there's a life that comes from above, that comes into us.
I've had the privilege of traveling many nations, seen many people. Altogether I guess, many times it's put around the world. I've been pretty near every nation in the world, missionaring. And I notice, when I strike a nation, the strange thing is that that nation has a certain spirit. That spirit of that nation seems to be the--like dominate the nation.
We go to Germany, and it isn't like the spirit that's in Finland. We go to Finland; it isn't like the spirit that's in Australia. And you go to Australia, it's not like the spirit that's in Japan. Then come back to America, it's got the American spirit. Everywhere you go, you find a different spirit. The people live different, act different, but one great thing I have noticed, if you take a German and send him to the United States, he will soon take the spirit of the United States. Take an American and send him to Germany, he takes the spirit of Germany. But wherever and whatever nation you go to, when you find borned again Christians, they're all the same no matter where it's at.

And I've seen people, that come into the meeting, like in... Our largest crowd that we ever had was five hundred thousand in Bombay, and then I guess, my greatest altar call, we ever numbered was at Durban, South Africa, thirty thousand, one afternoon of heathens, gave their hearts to the Lord Jesus, when they seen something take place at the platform. Ten thousand Mohammedans followed that.
Now,--but I've noticed, take the bushman, and the tribesman, that come in that doesn't even know which is right and left hand. They'll wear no clothes. They don't know one word of English. They don't know any, but just their tribal language, but when they receive the Holy Spirit, they act and do just the same things you do, when you get the Holy Spirit, just act the same way, go--just exactly the same. It shows that God is universal. God is omnipresent, omniscient, infinite, and He works the same with all these people.

William Branham, Sermon "What It Takes To Overcome All Unbelief: Our Faith"
http://www.en.branham.ru/sermons/60-0729‌‌‌‌‌‌‌‌‌‌‌‌‌‌‌‌‌‌‌