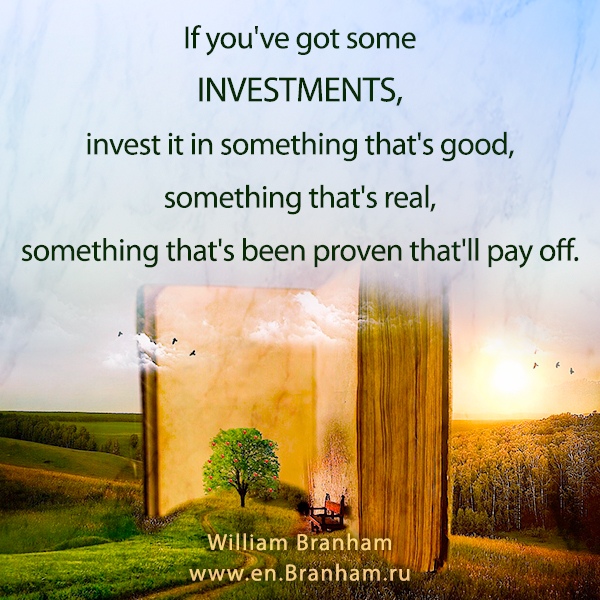 I notice among people sometime, especially in... A man'll get ahold of a little money, and then he'll try to invest it in some kind of a get rich overnight, some unidentified business. You'll lose the shirt off your back, and you know that. See? Don't you try that. And a good, sensible, thinking businessman won't do that. It's somebody who's green at the job will take a chance like that. It never pays off.
Oh, how many cases have I seen in my time where people had their life's saving, and they get some little gadget out, get rich overnight real quick, and all like this, and they got it. Then the first thing you know, they find themselves up on--on the skid row somewhere, trying to satisfy their--or drown their thoughts of what they done. And that could be applied also in the realms of Christianity. Some get rich overnight, shake hands with the preacher, and put your name on the book, and it's all over. Don't you never believe such stuff as that. It don't work out. It's got to come one way. These get rich overnight, doesn't... A good businessman won't fool with it. If you got any--anything you want to invest in, get some identified business, something that's been proven, it--it keeps--it keeps its promise; it pays off.

And here's another thing. Don't keep your money in your pocket. You'll never get anything. Somebody'll steal it from you after while. You don't want to do that. Jesus taught the same thing. When you've got a talent, don't--don't hide it. You got to put it to use, growing. Now, I may be talking to Presbyterian, Methodist, Baptist in these breakfasts, and whatevermore. You never know who's setting before you. See? So, remember, if you've got some investments, something to invest in, invest it in something that's good, something that's real, something that's been proven that'll pay off, some good, reliable, identified firm that has been proven to pay off in the past, got a name behind it. You men know that. Even if you have to take it slower coming up, your--your dividends are--are smaller, yet I'd rather know all my money I was drawing two percent and sure to get it, than drawing fifty percent and never get it: promised fifty percent. See, you want to--you want to stay with the firm, or the--the business, that's got a background, that's got a name behind it, something that's going to pay off and something that's right.

Now, this young fellow that we're speaking about, this young businessman, why, he was--he was given the opportunity to make an investment in one of the greatest businesses that he could invest in. He was given the opportunity to follow Jesus Christ. And what a ridiculous thing that he did. What a rashal thing that... This young fellow, given this type of an opportunity to invest his--his soul, and his money, and whatever he had, in the Kingdom of God, and he turned it down flatly. We look at him this morning as--this young businessman--as a very poor businessman. But you couldn't have told him that. Jesus couldn't tell him any better. See, the Word of God, when Jesus speaks, it's all truth. It doesn't have to be explained. God just speaks the truth, and He don't have to go around like we do to try to--to explain it. It--it... That--that's all there is to it. He said, "Follow Me." That's all. He didn't have to tell him why, or explain it all like I do, and other people do. But His words are all truth. We don't have to go around with it. Just say it. He said, "Follow Me," and that settles it. He had the invitation to make an investment in Jesus Christ. And that's the Person I'm speaking about this morning, the investment that I want you to make, if you haven't made it.

But the rich young fellow, the teenager of his day, had probably inherited a lot of money, and--and... Which that's all right. There's nothing against that. And I'll--I'll be thankful for any man or anybody that's been given that privilege. But when the... What I have against the fellow is this: being a man of business... And did you notice, he asked for Eternal Life? That was his business proposition, "What must I do now to have Eternal Life?" And Jesus told him exactly what to do. But he wasn't interested, because of the thing that he had to do to--to have Eternal Life.