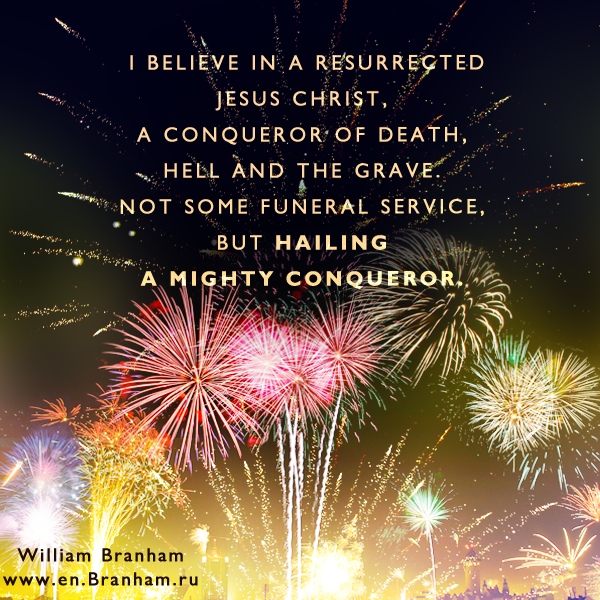 Churches of today has changed to what they was on the day of Pentecost though. Oh, how much changing they have done since that day. Churches meets today to honor, seem like, I hate to say this; but it seems to me like that churches meet today to honor a corpse. They go into the place and they sing, "Nearer My God To Thee," and some kind of a slow morguey thing like that, it makes a wearied sound. Why, they--they come around you and say, "Now, let us now say the apostle's creed. Let us repeat this certain certain creed that doctor so and so of a certain certain so, so and so..." Oh, my. Like you were sorry about it. And half of them stay at home to watch the television instead of coming to church on Sunday. That's right. Dead, just--just a corpse moving around. And then a corpse preaching, and a corpse trying to tell about a corpse that once lived, and lived in a tomb many years ago, a corpse. And just corpse, corpse, corpse...
They are going to honor a Christ that died nineteen hundred years ago. That's almost exactly where the churches is today, trying to honor a corpse instead of hailing a Conqueror. Amen. Glory to God. I'm glad to be Pentecostal in heart, not by denomination, no, sir, rub my name away from there. But the experience... We're not coming doing honor to some dead man. We're hailing a Conqueror Who conquered death, hell and the grave and sickness, every demon, every unbelief: conquered it.
Now, can you imagine if this school here had a baseball team or a basketball team, and they went out and conquered their foe and returned back. Could you imagine them standing like, singing some kind of a little song like "Nearer My God To Thee" to them? Why they're blowing flags and hailing them and making... How about when Napoleon came back? What about Stalin, when they went into Germany, how they fired the guns and done the Germ--or the--the salute, and put their legs across that Russian salute? How about when our boys returned home from their victory? The whistles blowed; the people went wild; they shot guns; they screamed; they rung bells. Why? We'd conquered our enemy. Glory.
And today you'd think you're at some kind of a morgue: go into a church and they, "We believe in God the Father Almighty." I believe in a resurrected Jesus Christ (amen), a Conqueror of death, hell and the grave. I believe that He's alive tonight, and in this building alive with us, according to His promise, "Wherever two or three are gathered together, I'll be in their midst." Yes, sir. Not some funeral service, but hailing a mighty Conqueror.