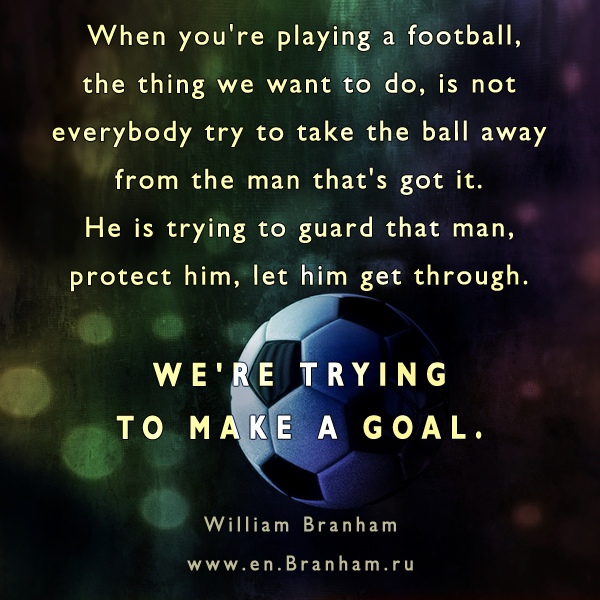 When you're playing a football, the thing we want to do, is not everybody try to take the ball away from the man that's got it. He is trying to guard that man, protect him, let him get through. We're trying to make a goal. See?

But could you imagine a team so untrained as to find one man, their own man, with the ball running to the field goal, and then instead of trying to knock the enemy away from him, the opposing team, to let your own man that's got the ball take off with it, every man trying to take the ball out of his hand? Why, you're bound to lose.

And today we have the same thing. When we see God come on the scene and going to bless a certain thing, let's keep all the enemies away from it. Let's use our influences as tackles, not runners, tackles that protects the runner, lets him pack the ball through; because there's no opposition, all he has to do is just keep running. And we should be tackles.

Many times, in a—in a church, a little church can have a revival going on. Someone will want to go out here and lead a prayer meeting, and then he's got a different idea from what really the Bible says, but he believes It this way, anyhow, and he'll start an influence and draw others away from It.
The thing to do is protect this Message, the way It's going. Stay right with It, and knock everything away from It, if we're ever going to cross the goal line.

William Branham, Sermon "One Man's Influence On Another"
http://www.en.branham.ru/sermons/62-1013‌‌‌‌‌‌‌‌‌‌‌‌‌‌‌‌‌‌‌