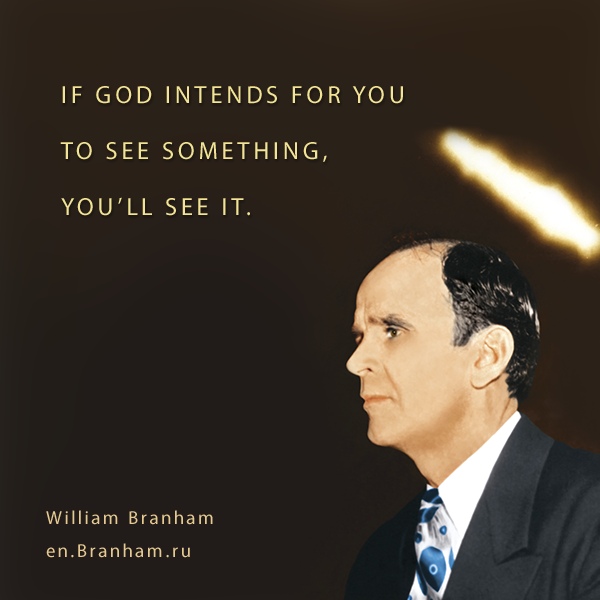 Sometime ago, as a young minister, when my first revival come; I had it over here on the corner, where this housing project, in a tent. I was baptizing a group down at the river, that Sunday afternoon, when the Angel of the Lord made His first appearance in public, in a vindication of the Message that I was to speak. And It was a Light came down from Heaven and stood there. People are perhaps in the tabernacle tonight, who stood and seen that Light. And I started forth, telling it, and so forth. And all you know how the story goes; and on and on.

And people sometime would walk away, and say, “That’s just imagination.” They’d leave a meeting where people would see It, and walk away, say, “I saw It.” Others say, “Well, I didn’t see It.”
Now, of course, God lets see who He wants to see.

When the wise men followed the stars, there’s not one speck of history, or any observatory, or anything…And they even kept time by the stars. But no one seen that Star but the wise men, see, that’s right, ’cause they were looking for It. And they were expecting to see It, and It guided them to the Christ.

And, yet, It passed over every observatory, and as—as the people looked at the skies, to tell the times, and so forth. But nobody seen It going, but the wise men, for it was intended for them to see It.
If God intends for you to see something, you’ll see It.

Elijah standing at Dothan, that time, and he looked around. And the servant looked out, and said, “Oh, look at…” The Assyrians were encamped.
Elijah said, “Why, there’s more with us than there is with them.” He looked around, he couldn’t see nothing but Elijah standing there.
“God,” said, “open this young man’s eyes, Lord.” And when, with the same eyes, only visual eyes, that, when he opened his eyes, around that prophet stood chariots of fire, and horses of fire.

It’s somewhere. And we know that His Presence is with His believing children.

William Branham, Sermon "Everlasting Life And How To Receive It"
http://www.en.branham.ru/sermons/54-1231‌‌‌‌‌‌‌‌‌‌‌‌‌‌‌‌‌‌‌