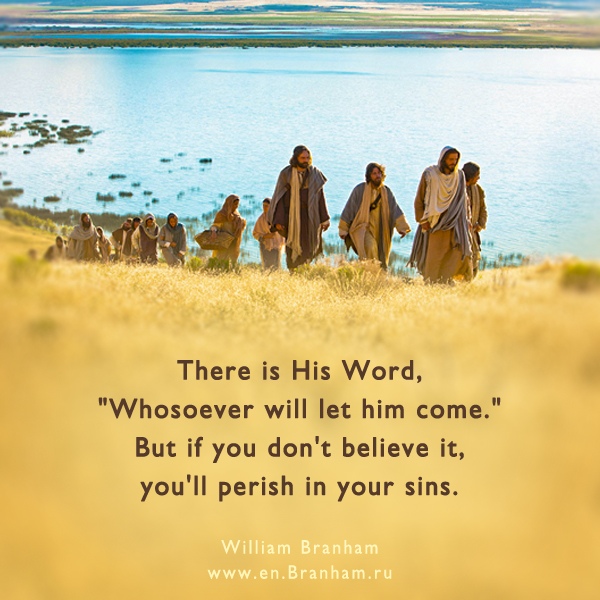 I was thinking for a moment of this man, the distress. Perhaps, one time he might've gathered Hisself with a group that didn't take up with Jesus so much. But there come a time when he had need, He must come. So he came to see Jesus, because his son was laying at the point of death. He had to do something.
Jesus said to him, "Except you see signs, you'll not believe."
But the man didn't speak back to Jesus. He said, "Lord, come ere my son die."

Now, the man... I want you to notice something, get this point in mind. The man wanted Jesus to come down to his home and heal his son. But Jesus did not grant his request in the way that he wanted it. Sometimes He doesn't do it for us that way. You might say, "If I can get in the prayer line... If God will do a certain thing for me..."

But Jesus said, "Thy son liveth." And the man believed His Word. Now, what if the man had not believed His Word? It would've been different. The son would've died. Just like today, if you don't believe His Word, you'll perish. There is His Word, "Whosoever will let him come." But if you don't believe it, you'll perish in your sins. If you can't believe it for your healing, you'll probably die sick, perish in your sickness, young age. But if you'll believe the Word that He said, then you shall have whatever things you ask for, and what He's promised.